The deployment of a national hydrogen transport grid is crucial to supporting the development of the sector. In June 2021, Teréga and GRTgaz launched the first national consultation of the low-carbon and renewable hydrogen market to identify the needs of actors in the hydrogen market, taking existing gas transport and storage infrastructures into account. View the findings.

This consultation comes out of a need for planning of the grid, identified by Teréga and GRTgaz. Firstly, to respond to the needs of low-carbon and renewable hydrogen market actors at the local, national and European levels. And secondly, in the longer term, to enable the hydrogen market to access existing infrastructures used for gas transport and storage.

The first round of the consultation, launched on 1st June 2021, was aimed at all actors in the low-carbon and renewable hydrogen market: industry, current or future H2 users, suppliers, producers, energy shippers, public and institutional actors, associations, infrastructure operators and academic actors. Responses were collected via a form, available on our website and on the GRTgaz website.

To take the conversation further, workshops were held at the end of 2021 involving actors across the territories to look in greater detail at some of the issues identified by respondents, particularly questions about CO2-H2 complementarity and the mass storage of hydrogen. The insights gained from those workshops and the in-depth analysis of consultation responses have enabled us to put together a consolidated joint vision of the future low-carbon and renewable hydrogen market.

Teréga and GRTgaz received more than 133 responses to the consultation questionnaire, which allowed them precisely to identify 90 hydrogen production and/or consumption sites across the whole of France. Some actors even wanted to go beyond simply answering the questionnaire. As a result, GRTgaz and Teréga received nearly 70 requests to enter into bilateral discussions, to allow actors to go into greater detail about their expectations and their requirements for transport and decarbonisation of their usage.

The majority of H2 actors are from industry

Industrial actors were heavily involved, making up nearly half of all respondents. 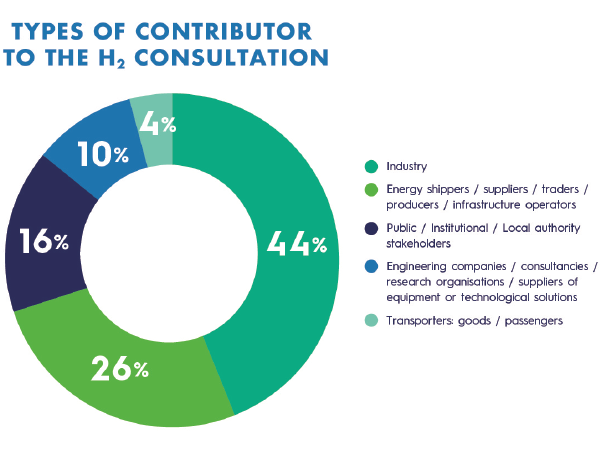 The big findings of the H2 market consultation

The market is heavily driven by the need to decarbonise French industrial activities, a need to which energy shippers, suppliers and producers want to respond, supported by local authorities who are committed to the energy transition in their own areas. Although hydrogen has been identified as a lever for decarbonisation, it is not the only one; nearly 60% of industrial actors are also very interested in solutions for the capture, utilisation and storage of CO2 (CCUS) to help them reach their greenhouse gas emission reduction targets.

There is also a huge appetite for hydrogen in mobility, in the medium term (2030-2040), particularly among territorial institutional actors, who see it as a lever for making their public vehicle fleets greener. In addition, the challenge of decarbonising the air transport sector has highlighted a significant requirement for hydrogen from 2030-2035, either in liquid form, or for the production of synthetic fuels.

Actors also have hydrogen in their sights for the production of renewable and recovered energy, heat production, for use as a raw material, and as a way of offering greater flexibility in the electricity system.

Hydrogen production, meanwhile, is chiefly envisaged to be achieved through electrolysis of water, from as early as 2025, but also through the reforming of natural gas with capture and storage of the carbon. The gasification of biomass is also mentioned. 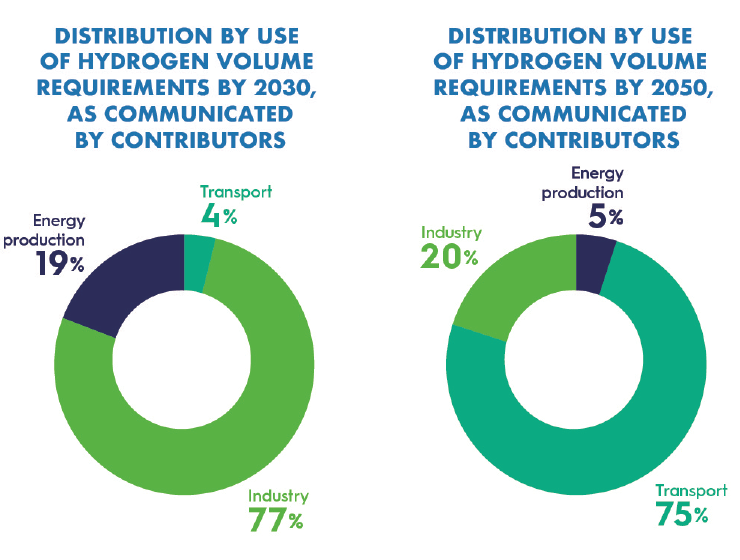 Actors clearly foresee a staged development of the H2 market:

The market’s response broadly confirms the geographical areas originally identified for hydrogen production and/or consumption in the European Hydrogen Backbone report. That consultation helped map out those areas in greater detail, particularly in the Grand Est region, around the industrial areas at Carling in Moselle, or stretching along the Rhine, where a number of production and consumption projects have been announced. 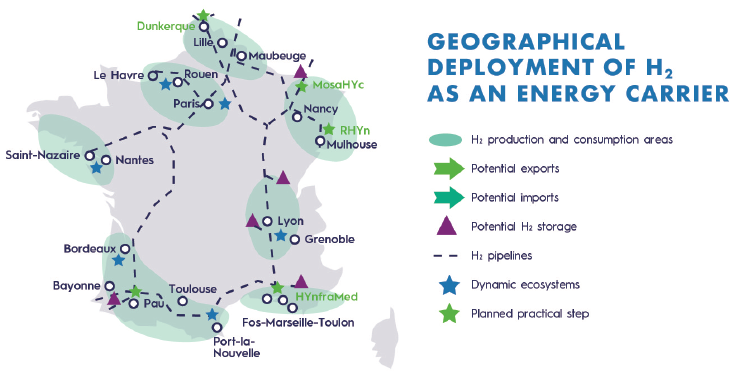 The consultation highlights the many potential imbalances between forecast production and consumption, providing evidence of when and where hydrogen logistics will need to be in place in the short, medium and long term. Those needs are also underlined by the actors, who talk of the importance of having a transport and storage system readily available, capable of giving them access to a diversified, competitive and secure supply of hydrogen.

The findings show that production volumes, in line with the targets set out in the national hydrogen strategy for 2030 are, up to 2040, greater than the needs which have clearly been identified in the long term, but which remain unclear in the short and medium term.

Industrial hubs are where current and future large consumers for low-carbon and renewable hydrogen are concentrated, along with the majority of hydrogen production projects.

The falling cost of hydrogen

For actors in the market, financial competitiveness is the key factor for success in developing H2 as an energy carrier. They highlight the cost of electricity from renewables, which alone accounts for 50% of the cost of producing hydrogen by electrolysis. A fall in production costs is predicted in the medium to long term, but significant subsidies are expected from the public authorities in the short term.

Logistics: central to the concerns of H2 market actors

The consultation has shown that the vast majority of actors stress the importance of logistics in meeting their challenges, namely guaranteeing secure access to the most competitively priced hydrogen for consumers and an outlet serving a large catchment area for producers. In this area, 90% of contributors to the consultation foresee hydrogen transport being via a network of pipelines. Access to storage also pops up in responses as being essential for guaranteeing security of supply and providing a flexibility mechanism to balance the gas and electricity systems.

The planning of those logistics, with proposals for a grid connected as appropriate to storage facilities, even came up in territorial workshops as the most effective way of creating and cementing the links between potential supply and demand.

A neutral operator to organise the market

The consultation was also an opportunity to identify dynamic areas where logistics projects could be launched in the short term (Alsace, for example). But there are other less mature areas where the first steps could be taken in planning participative hydrogen transport and storage projects (areas like Marseille or Dunkirk).

Actors acknowledge the great expertise that exists among transport grid managers in this area.

Respondents also gave a favourable response to the work being done, and expect energy transport operators to take on the role of facilitator to simplify the link between producers and consumers of hydrogen. They feel it is important that a neutral actor be appointed to organise the market and help ensure supply matches demand in territories that are favourable for the deployment of H2 as an energy carrier.

Some industrial actors are envisaging CO2 capture, utilisation and/or storage (CCUS) in competition or in addition to the switchover to H2, indicating that a clear vision of what lies ahead in terms of logistics is just as important for CO2 as it is for low-carbon and renewable hydrogen, if projects are to come to fruition. Workshops were organised by GRTgaz and Teréga within several ecosystems to discuss the possible synergies between H2 and CO2 across the different territories.

The next steps in the hydrogen market consultation

One really good thing about the exercise is that it will be repeated, so that transport needs, which are bound to change over time, can regularly be reassessed, to ensure the jointly constructed network will properly serve the needs of a developing high-performing hydrogen market.