What are the prospects for NGV and bioGNV in France in 2022?

When it comes to transport, NGV and its bioGNV version provide an answer to environmental challenges that is affordable for users, enabling them to embark on the energy transition process gradually. Having already been involved in injecting biomethane into its grid for a number of years, with the injection of new – and potentially abundant – similar gases in the near future, Teréga supports the rise of clean, sustainable transport.

NGV: an answer to the challenges of decarbonising transport

The transport sector is the main emitter of Greenhouse gases (GHG) in France, with 136 million tonnes of CO2 equivalent in 2019, i.e. 31% of the country’s total GHG emissions, excluding foreign transits. Against the backdrop of a veritable climate emergency, France and its European partners are battling to limit emissions effectively, emissions which affect public health just as much as the climate: NOX and fine particulates are responsible for respiratory illnesses, not to mention noise pollution.

Natural Gas for Vehicles, produced from natural gas (NGV) or from biomethane (BioNGV) is one solution recognised by the authorities as an answer to the challenges of air pollution and decarbonising the road transport sector. “This is a real alternative to diesel for transport companies,” Patrice Couget, Teréga’s Sales Representative for the Territories, explains. “This solution’s environmental impact, calculated by analysing the lifecycle of the vehicles on top of their overall running costs, makes it a ‘no-brainer’.” 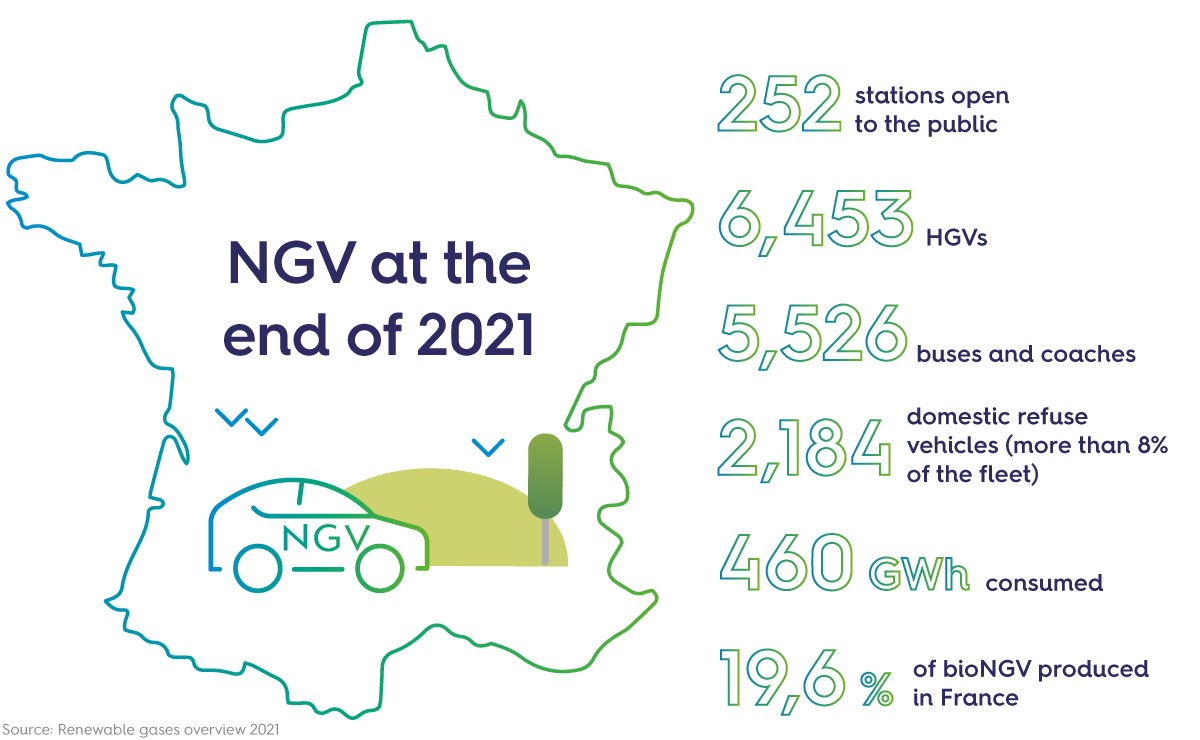 The current state of NGV in France: transport booming

The transport sector’s consumption of NGV and bioNGV is growing

Two trajectories are set out on the national scale:

At the end of 2021, France had 252 stations open to the public (including 25 in Teréga’s territory). “This network is quite well distributed across the territory”, Émilie Mauger notes. “Understandably, it is concentrated close to users, near major towns, trunk roads excluding motorways, logistical hubs and industrial hubs.” 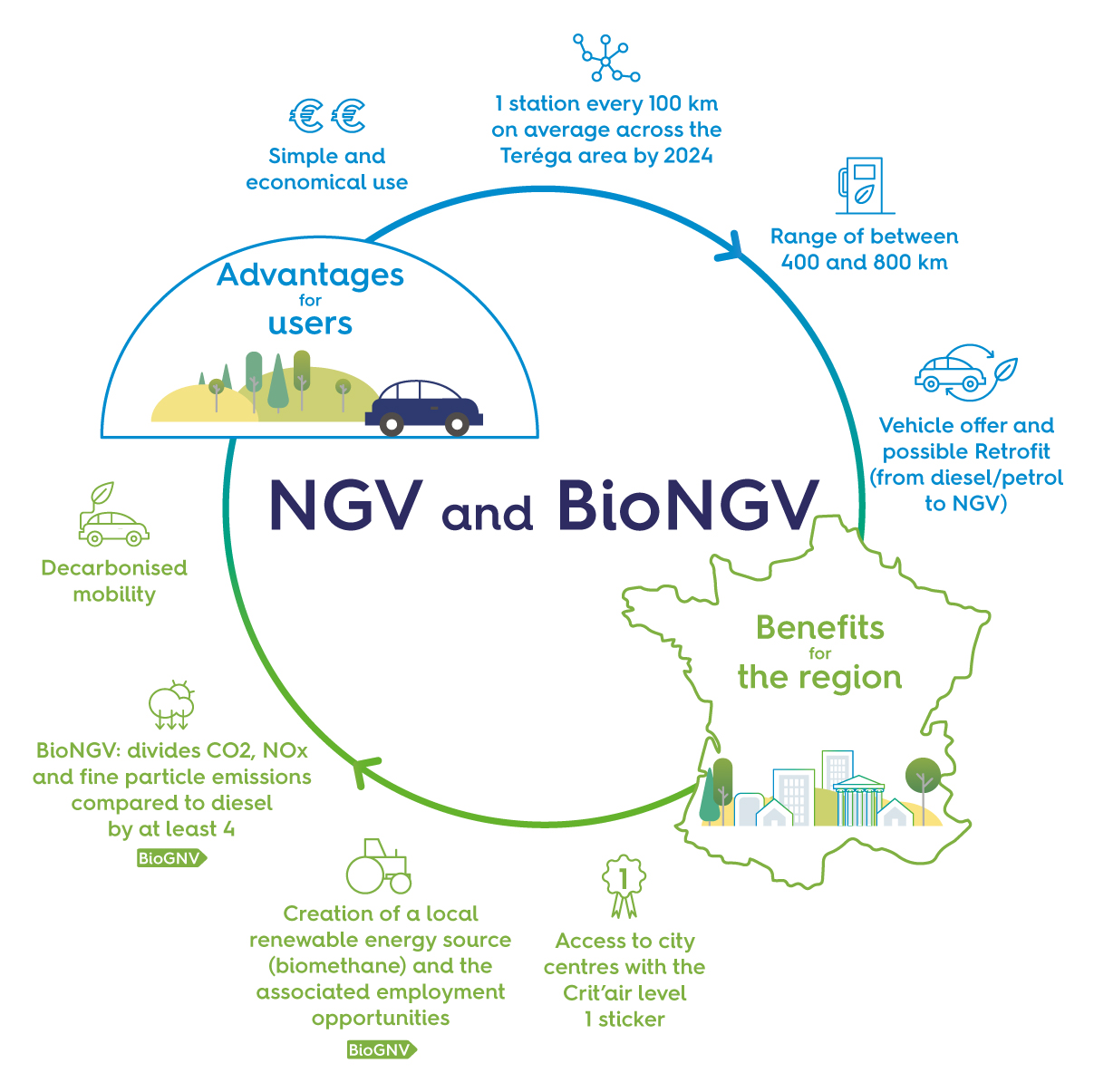 The cost of using NGV is competitive

On the fuel side, the effects of the pandemic, now followed by those of the Ukraine situation, have created a huge imbalance between energy supply and demand, leading to a rise in prices. Despite that, virtual parity between diesel and NGV has continued. NGV is also cheaper than the price of unsubsidised hydrogen from renewables, currently available at the pumps for between 10 and 12 euros/kg, a price that should remain stable for as long as mass production units are not evenly distributed across the territory.

As for the cost of vehicles, and without subsidies, NGV vehicles come at prices that are very comparable with their diesel equivalents. Hydrogen/fuel cell solutions are less freely available at the moment, and battery-powered electric vehicles are less suited to extra-urban heavy transport use with the technology currently available.

“If you look at these two economic points, along with environmental regulatory constraints, NGV comes out as a suitable choice, easy to use and sustainable for anyone renewing all or part of their fleet today, from the forklift truck to the 2-3 axle heavy goods vehicle.” comments Patrice Couget.

Number of stations expected to double in the next 3 years.

stations across the 14 departments covered by the Teréga grid in 2022.

In association with the various stakeholders, from local authorities to industry, grid operators like Teréga support project owners. In particular, they offer them an opportunity to optimise their arrangements by connecting to the high pressure transport grid, when it is nearby. “Filling a tank to 200 bar from the medium pressure available on the Teréga 45 bar grid, rather than the 4 bar available on the domestic grid, reduces the electricity bill for compression by a factor of 2.5,” explains Patrice Couget. “Moreover, this kind of search for energy efficiency is encouraged by the 2020 transport framework law (LOM).”  Two stations have therefore been connected directly to the Teréga grid: in Damazan (Lot-et-Garonne) and Saint-Sulpice-la-Pointe (Tarn).

Another less-well-known possibility: an industrial actor may share the private NGV micro-station intended for their fleet, turning it into a public distribution point. This means they can optimise their investment costs, and at the same time create a “secondary grid”, a valuable distribution resource for smaller communes, where they can refuel domestic refuse vehicles, for example.

What challenges does the future hold for NGV and bioGNV?

In the immediate future, by providing entitlement to the Crit'R 1 badge, NGV and bioGNV will allow vehicles to enter low emission zones (LEZs), which are due to be rolled out widely across towns with more than 150,000 inhabitants by 2025.

Looking further ahead, NGV is part of a process of sustainable management and recovery of fatal methane emissions resulting from the decomposition of various forms of organic waste. Left alone, that methane escapes into the atmosphere. It is therefore essential to recover that waste in the form of biomethane. Such an investment presents a win-win opportunity, allowing local and renewable resources to be integrated into the energy mix.

“To give you an idea of the scale, the potential of renewable gas resources, if fully directed toward transport, would represent the equivalent of 70% of the energy used by all road transport in France, or three times the amount of Russian gas on which we rely,” explains Patrice Couget.

The renewable gas sector therefore emerges as an opportunity for energy independence, and at the same time offers solutions for transport and other uses. On top of that, it creates a circular economy at territory-wide level, creating jobs and new business activities.

Methanation: combination of hydrogen and CO2

NGV and bioNGV: advantages for a mobility that is more respectful of the environment and the regions

What are the prospects for biogas and biomethane in France in 2021?

Our desire: to release the energies of the regions