Hydrogen: an essential energy form for the energy transition

Although we tend to talk of hydrogen as a the energy of the future, its use is, in reality, quite long established in industry. The current challenge for the energy transition is to decarbonise hydrogen production. Solutions exist. The issue now is to develop them on a large scale, constructing a hydrogen industry that can speed up developments in its use.

Hydrogen (H2) is an element found in abundance in the universe. This invisible, colourless gas is however rarely found in its pure state. It is found most notably in the composition of water (H2O). Due to its chemical properties, it is used a great deal in industry (oil refining, ammonia production, glass production etc.). But it also has valuable energy properties.

That means hydrogen can also be used:

Strictly speaking, hydrogen is not an energy source; it is an energy carrier that must be produced and stored before it can be used. Today the most common method of hydrogen production is steam reforming. This technique, based on fossil fuels, is a source of greenhouse gas emissions. That is why a variety of solutions are being researched to move across to decarbonised hydrogen production: electrolysis of water, pyro-gasification etc. 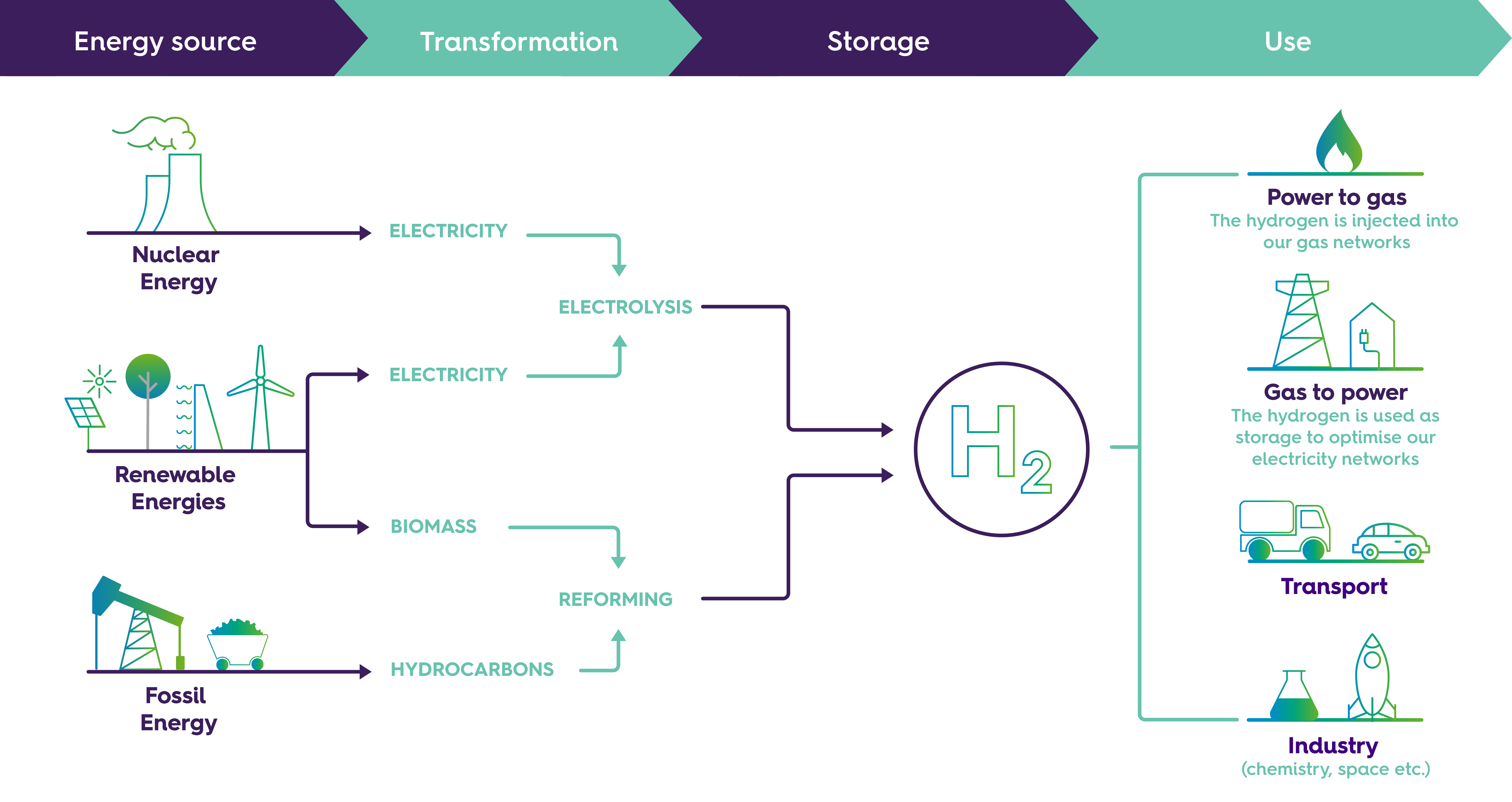 Toward the expansion of a hydrogen industry

The expansion of the hydrogen sector will help overcome a two-fold challenge: to speed up the energy transition and strengthen the fabric of French industry. The reason is that the fine-tuning of hydrogen-based solutions for sectors which are hard to decarbonise will be a factor for significant regional competitiveness and economic dynamism.

In France today, hydrogen is chiefly used in industry. That market is estimated at 1 Mt, 94% of which is produced using fossil fuels. That production, which emits greenhouse gases, makes up 3% of France’s CO2 emissions nationally. The decarbonisation of industrial hydrogen is therefore a logical priority for French hydrogen policy.

That greening of the industry should be enabled by the large scale development of hydrogen production by electrolysis of water. A 100% renewable (water and electricity) production process, allowing the production of green hydrogen.

Hydrogen as a fuel is currently being envisaged chiefly for heavy vehicles: road, rail and river transport etc. Hydrogen can be used as an energy carrier in fuel cells to supply electric vehicles. Heavy vehicles or hydrogen powered cars emit only water vapour, making this a fitting solution for green mobility. Research is also under way to produce decarbonised synthetic fuels from hydrogen, such as ethanol, by the hydrogenation of CO2.

of hydrogen by volume injected into grids by 2050

tonnes/yr of decarbonised hydrogen produced in Europe by 2023

Development of the hydrogen transport grid and storage

At Teréga, we have an ambition to contribute to the development of the hydrogen industry across our regions. As a gas infrastructure operator, our mission is to adapt our grid to facilitate the injection of renewable gases, including hydrogen, to enable their circulation between producers and consumers across France and Europe.

As part of the 2018 hydrogen plan, Teréga worked with other French gas operators on a joint report sent to the Ministry of Ecological and Inclusive Transition. That report sets out the technical and economic conditions for the integration of hydrogen into our infrastructures. An analysis that confirms the role of gas infrastructures in the rollout of hydrogen energy in France and achieving carbon neutrality in 2050.

In addition to its energy benefits, hydrogen represents an opportunity for developing multi-energy grids. Accelerating the synergies between networks has become a significant challenge in the energy transition, to:

Power-to-Gas consists in transforming electricity from renewable sources (wind, solar) to hydrogen by the electrolysis of water. The resulting renewable hydrogen (sometimes called green hydrogen) can then be: 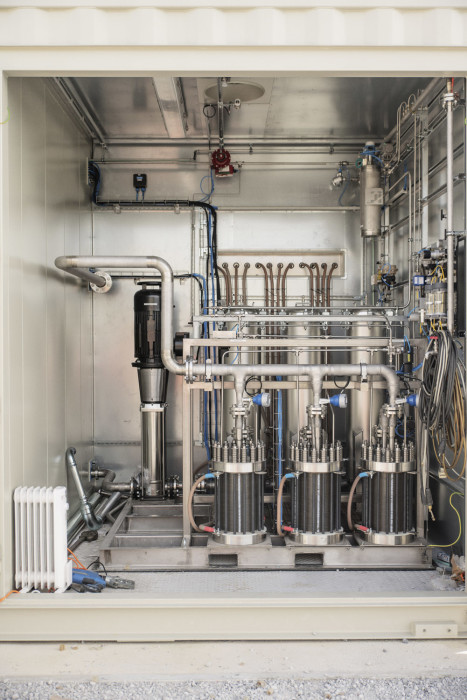 Electrolyser on the Jupiter 1000 project.

At Teréga, we are convinced that multi-energy is the route to energy transition. That is why we have worked alongside GRTgaz in building the first French industrial Power-to-Gas demonstrator: Jupiter 1000.

Taking this further, we have also launched our IMPULSE 2025 project, a demonstrator enabling us to imagine and construct a smart multi-energy system which is due to go live by 2025.

Hydrogen production: a challenge for the energy transition